Evolution of the computer
From the Babbage’s differential engine realization and technology of the computer has been changing dramatically. Earlier it was a mechanical architecture used to implement algorithms and later it was transformed to architecture of logic gates that are made of electrical valves. Invention of the transistor led to an acceleration and IC technology (Introduced later) have been shrinking the size and increasing the processing power of the computer. With the introduction of parallel processing speed is multiplied while clock period remains the same.
Quantum computers
As the computers become smaller, size of transistors and gates become much smaller (A gate may be built of several atoms). To explain the behavior of matter in this scale we cannot use laws of classical physics. Therefore quantum mechanics is needed (Schrödinger Equations would be the governing equations instead of Newton or Maxwell laws).
Even though internal structure of the Bipolar Junction Transistor cannot be described without quantum mechanics, with suitable models, it can be explained by circuit theories. Therefore, logic gates that are currently used are called as conventional logic gates. As gates become much smaller it arrives to a point where they behave according to quantum principles. A computer that is made of such gates leads to a novel way of processing. New algorithms based on quantum principles will result faster and efficient processing.
Bits of quantum computers are known as Qbits. State of a conventional bit is either ‘0’or ‘1’ whereas state of a Qbit is ‘0’ or ‘1’ or ‘both 0 and ‘1’.The state ‘both 0 and 1’ is known as coherent
superposition. Quantum registers are more efficient than a conventional register. In an 8 bit conventional register, only 1byte can be stored at once whereas a quantum register can store
256 bytes (combinations of 8 bit numbers). Once quantum register is processed by a quantum processor outputs for all the combinations are given. This is similar to parallel processing. A system with n Qbits can perform 2n computations at once. Hence, quantum computer algorithms are more efficient than conventional algorithms. For instance, the complexity of factorization is exponential in conventional computing and polynomial in quantum computing.
Simple quantum logic gates of two Qbits have already been constructed in laboratories and it is believed that first quantum computer will appear before 2020.
Need for speed
Speed is the quest of the designers, and they always try on something to increase the speed atleast by a small amount. Because of these experiments, time taken for a specific micro operation to be executed becomes close to zero day by day. However, close to zero is not zero!
Unfortunately, there is a huge gap between zero and close to zero just like an energy barrier. In fact there is an infinite number of numbers exist between these two numbers!
L1= limε→∞0xε=0 and
L2=0/0 is indeterminate. Can be 0, 1, 1000, infinity or any value.
To complete 1015 micro operations, zero time processor takes no time and 10-10s clock period(10GHz) takes more than a day. Therefore, ultimate target of the mankind would be to achieve zero time processing and zero time communication.
Upper bound of the relativity
According to the special theory of relativity maximum speed of communication is 3x108ms-1(i.e. speed of light) Maximum speed of a particle with non zero rest mass should be less than that. Since the diameter of an atom is about 10-13m, clock speed of the fastest ever computer (Single processor) built by existing technologies will be well below than 1018 GHz .Disappointing!
EPR photon pair
As a result of a thought experiment developed by Albert Einstein (E), Boris Podolsky (P) and Nathan Rosen (R) EPR paradox was introduced. This is one of the most discussed phenomena in quantum mechanics.
A basic hypothesis in quantum mechanics is that all the observables cannot be known at 100% accuracy. If momentum of a system is measured then its position is affected, for energy its time is affected. Another observable is the spin of a particle (Related to the angular momentum ofthe particle). Particles have spin in x, y, z directions and they are given as ‘up’ or ‘down’.According to quantum principles, the spin of a particle cannot be measured in two directions at the same time.
Using the aforementioned facts, three physicists made a paradox. Out of the discoveries, one is interesting. A photon pair (EPR photon pair) should communicate each other. When two photons are communicating (Even if they travel in opposite directions), speed of a photon relative to another photon is the speed of light. Thus, the communication should be faster than light (If it is possible). So is that a way to make our dream a reality?


Communication via an extra dimension
Lets consider five dimensions that are x, y, z, time and one extra dimension (A recent idea about the universe is that it is a five dimensional black hole). For the ease of analysis, entire 3D Euclidian plane (i.e. R3 vector space) is mapped in to one direction, which is position r, and time is perpendicular to r. 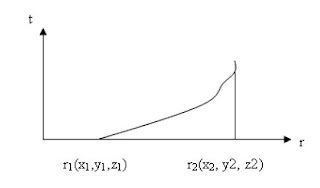 For any object (Wave or particle) to travel from r1 to r2 takes some time. That implies always,
∂t/∂r >=0
This happens because any object that obeys wave particle duality has a property related to time. If we could map that property to a time like dimension ( let say w) then w, t, and r perpendicular to each other. Therefore time taken to travel from r1 to r2 is zero. 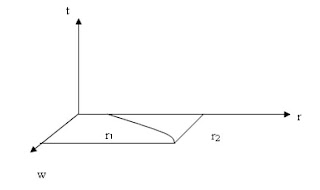 The most challenging thing is finding a way to transform properties of t to properties of w. It is possible only if we could find any object that has no time related property. It should be anything that does not obey the wave particle duality. Once it is done zero time processing or communication is no longer a dream.
Does our mind obey the wave particle duality ?
Posted by Chanaka Rupasinghe at 2:23 AM